Glancing around the room at the first screening of a video feature we’d just produced and seeing lots of engaged faces, I felt a wave of emotions wash over me. Pride, as it was the first mini-documentary we’d ever produced; relief, as it was a typical up-to-the-wire deadline; and a huge dose of amusement. It wasn’t a comedy, so why, you might ask, was I sitting there trying to hide my grin? Why? Because no one would have the first idea about some of the behind-the-scenes shenanigans that went on to get some of the best interview clips in the film…

I always think that creating great corporate video interviews should be classed as part of the dark arts. Sure, most people these days can pick up a smartphone and film – sometimes this is even the best approach. But for effective, professional corporate video content there is so much more to it. Sound quality, shot selection, journalism, framing, lighting… and it’s not always as straightforward as it sounds. Watching the screening of our feature got me thinking about some of our best improvisations in search of the perfect soundbite.

Here are a few of my favourites… 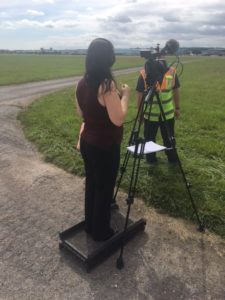 One of the secrets of a filming a great video interview is maintaining eye contact with the interviewee – and eyeline is critical. You don’t want your interviewee to be looking up or down at you for that perfect interview shot.

As a relatively short person (well, I’d like to say ‘petite’ but that’s stretching the truth somewhat) interviewing tall men is the bane of my life – but probably what I do most of in my corporate filming!

The first time a client gleefully suggested I stood on a box I was mildly offended. Now, years on, I’m totally over it! Any palette will do…  box, shelf unit, large case, I’ll take it.

This particular offering was a dog ramp while filming at an airfield. Mortifying…. but effective!

Props to the Client 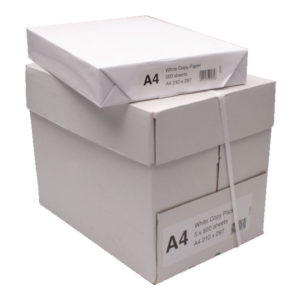 It’s always gratifying to know it’s not just me that has height issues. During a recent ‘talking heads’ filming session in an office, we needed to line up the top of a pop-up banner with our interviewee’s face, in order to keep their company branding in shot. Nothing was working. The banner was not playing ball… it was a fixed height – up or down. The chair the interviewee was perched on was a fixed height – neither up nor down. No amount of camera manoevering was working. No one could find a stool. There were no cushions.

We’ll name no names here, but for that perfect shot, our stoic interviewee was forced to balance on reams of A4 printer paper stacked onto the chair for half an hour, while answering questions on camera under intense studio lighting with no aircon. It was a great interview though! 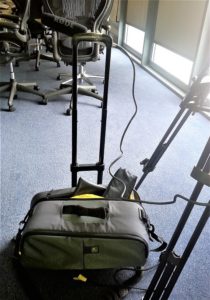 It’s not only the visuals that can cause problems when it comes to capturing content on camera. Ensuring that we record clear, crisp audio is also critical. It’s an unwritten rule (and so very true) that viewers can cope with fuzzy footage far better than they can cope with fuzzy sound.

Sometimes when you’re filming on location you don’t have the time or space to fix up the perfect audio kit. A boom mic or a microphone stand isn’t always possible, but getting the mic at the right angle for the interviewee is imperative.

I’ll always remember an on-screen interview in a packed ops room. No room for a boom mic in there! A reel of packing tape, a portable trolley case and one engineer later, our mic was at just the right angle to capture perfect sound for our interview.

Lighting an interview is critical. I’m sure you’ve seen many a video interview where the speaker’s face is barely visible in silhouette while the background is perfectly exposed. Filming into the light is the culprit, it’s never a great idea – and even worse when the light is constantly changing. 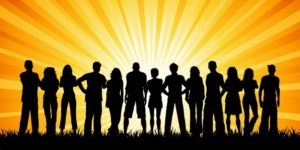 Cue filming an interview with a client in a glass-walled internal office with the sun pouring in through full-length windows across a corridor. Wherever we placed the interviewee there was reflection from the sun. There were no blinds. There was no shade. There was no hope… Or was there?!

The solution? Coercing an entire roomful of nearby tall office workers to stand in a tightly-packed line in the corridor to block out the sunlight… Luckily the interviewee was similarly height-challenged to me… so it worked a treat!

So, as for our mini-doc, what were the improv shenanigans that sparked my interview nostalgia? Was it the camera sellotaped to a coat stand to get the perfect extra angle? The broom handle with printed-off script stuck to the end doubling as an autocue?

And which videos do all of these improvs belong to? Well I’ll leave you to take a look through our YouTube videos and decide for yourself…

Posted in:
Back to Top
We use cookies to ensure that we give you the best experience on our website. By continuing to use our website you agree to the use of cookies on your device.OkRead more